It's time for my Omega XL review – which is a pretty unusual joint supplement:

Obviously – it all comes with a price.

And at almost $50/bottle, Omega XL is far from affordable.

Plus – it has way more complaints than I had ever expected.

So is this supplement a scam? I carefully analyzed each of its aspects below.

Note: This review is based on my opinion + research on Omega XL. 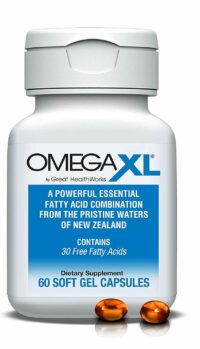 You can usually find it for around $50, though (due to discounts).

For this reason – it's more suitable for joint conditions caused by swelling:

It doesn't seem effective for anything involving cartilage damage (like osteoarthritis).

It's definitely not a scam – but it's not a good choice either:

Instead of paying a huge price on this product, I recommend an alternative that costs (at least) $30 less.

Omega XL In A Nutshell

But if you ask me – that's not really the case.

Despite having its own good side (especially clinical evidence) – it has enough issues:

Even so –  though I don't consider Omega XL a scam.

But obviously, I don't consider it a wise choice either.

So when it comes to joint pain relievers, it's surely not among my recommended products.

Before analyzing this supplement, I would like to give you some general info about it.

Who is the company behind, how does it work, what it promises, etc.

There's one thing that caught my eye about Omega XL initially.

It claims to be better than most fish oil supplements on the market.

According to its promises:

Now – I'm not saying these claims are fake.

But I personally cannot consider Omega XL better than most fish oil supplements.

That's because of its high number of negative reviews and very few details on the actual ingredients.

To me, these things tell a lot about the product itself.

I personally have never heard about this brand before.

But apparently – it produces several health supplements (around 10-15):

From what I noticed, Omega XL seems to be their best-rated product.

Now, at first sight – I would say this company is legit and honest.

So it's a brand I would trust (in terms of payment/shipping).

Despite claiming to be an excellent product, Omega XL doesn't seem amazing to me.

At least when it comes to its ingredients:

It's true that its main ingredient has some studies behind.

So in terms of composition – it's surely not a scam.

But it has enough flaws besides this advantage.

So in terms of relieving joint pain – I wouldn't expect a lot from this formula.

Now – let's take a closer look at its ingredient.

Basically – this is the only ingredient from Omega XL.

In reality, it's a mix consisting of several compounds.

Getting back to the mix itself:

But as I said, this mix is actually made of several ingredients:

To be honest – these 3 substances don't look amazing.

In fact – it's the Omega Fatty Acids that do most of the job (the other 2 ingredients are listed as non-medicinal).

However – this supplement doesn't give out 2 things:

It only mentions the dosage for the whole mix (300 mg).

But there's no info about the quantity of fatty acids it actually contains (which is something essential).

That's a big question sign, at least for me.

Omega XL's formula isn't terrible, but it's not excellent either.

At least that's how I see it:

Now – this supplement's main ingredient does have some studies behind.

So in terms of formula, Omega XL is far from a scam.

But if you ask me – it's clearly not worth the money.

You can get a similar (or even better) effect with cheaper products.

Coming up – I will analyze Omega XL's pills and schedule.

According to its promises, this supplement has an advantage here.

It claims to have smaller (yet more powerful) pills than regular fish oil supplements:

Now – I do agree Omega XL's pills are smaller than in most supplements.

But as I said, I doubt they're a lot more effective.

And even though they look great in terms of dimensions – they have a major problem when it comes to schedule.

Honestly, this is one of the biggest drawbacks of this product.

Basically – the minimal dosage is 2 pills per day.

However, if you want best results – you should normally take the highest recommended dose.

This means you should take around 2 pills 3 times a day – which means 6 pills a day.

That's what I understand from the label.

You can also take 2-4 pills a day, but the results won't be the best.

That's my conclusion after reading the directions.

And honestly – 6 pills per day is way too uncomfortable, let's face it.

Omega XL does have lower pills – which is a big advantage.

However, for best results – you should take around 6 pills per day.

So even though they're quite small, 6 is still a very big number.

That's a reason why I'm not a fan of this supplement.

In order to see how Omega XL works – I tried to analyze other people's opinions.

I mostly checked out its Amazon reviews (which are known to be real).

In this way, you can see an unbiased perspective.

However – most of its positive reviews are either very short or they have no words.

Out of the few detailed positive reviews, here's what most users say:

But as I said – there aren't many satisfied users.

And out of the existent ones, most didn't give too many details.

On the other hand – there are way more detailed complaints.

On Amazon first 2 pages, 90% of the reviews for Omega XL are negative.

Most people rated this product as low as 1 star – which means they're extremely unsatisfied.

So here's what most users complain about:

Now – some users claim they have used the supplement for more than 6 months.

So their complaints are clearly legit, not exaggerated.

Considering it has more negative reviews than most fish oil supplements – I would think twice before buying it.

Omega XL has a very high rate of negative reviews:

Besides, its positive reviews are very rare and brief.

On the other hand – the complaints are very detailed and numerous.

There are far more cheaper supplements with much better results behind.

From this point of view, Omega XL seems quite a safe product:

Compared to turmeric products, they cause way less side effects.

But even so, Omega XL deserves its praises at this chapter.

It causes stomach cramps very rarely – and they're very easy to prevent as well.

Just make sure to take the pills with or after the meal and you should be fine.

This is definitely the worst part about this supplement.

Considering its actual quality and value – I consider it way too expensive.

The formula does contain a trademark ingredient (which is usually pricier).

But even so – this doesn't explain the absolutely huge price, if you ask me.

In my opinion, Omega XL should cost around $30 per bottle for a fair price.

Anyway – that's not all:

Basically – in the worst case, one bottle can run out in 10 days.

If you want the best effect, it's recommend to take 6 pills a day.

Well, in that case – one bottle is going to last only 10 days. Keep this in mind before buying this supplement.

I only want to compare Omega XL with my #1 recommended fish oil supplement.

Basically – the difference between these 2 products is huge.

I won't mention anything about their effect – that's another story (though Optima Omega-3 has far better dosages).

But in terms of price, Optima Omega-3 is a much better option.

So if you want to spend your money wisely, I recommend this alternative.

Considering its formula and quantity, Omega XL seems really overpriced to me:

For this reason, I couldn't possibly recommend this supplement.

If you really want a quality product for a much better price – I recommend something else instead.

Good news about Omega XL at this chapter.

Just like the other products from Great HealthWorks – it's quite easy to find:

Out of these sellers – I strongly recommend going for Amazon.

It has by far the best price (even better than on its official website) and there are discounts quite often.

So you end up paying less on Amazon than on its official website.

You can also find Omega XL on Ebay – but I don't usually recommend buying anything from there:

So Amazon remains my top recommendation for this supplement (though I don't recommend the supplement itself).

Let me list down for you the most common inquiries about Omega XL.

Note: I might repeat something I already mentioned, but it's easier to spot here.

1. Where will I use this product?

Omega XL is a type of supplement for the joint.

So basically, it should help with several joint problems and improve joint health.

Its major claim is that it's better than most fish oil supplements on the market.

Based on Omega XL's bottle label, its usage directions are quite tricky.

It recommends that you take 1-2 capsules 1-3 times per day (with meals).

So the maximum number of capsules per day is 6 pills.

You can opt for taking only 2-4 pills a day, but the results won't be optimum.

3. Is one bottle good for one month?

Now – one bottle of Omega XL has 60 soft gel capsules.

So if you follow the 6 pills per day, one bottle for it is only good for 10 days.

It can last you for 1 month if you only take 2 pills/day.

But don't expect that you'll see the maximum results you desire.

4. Does it cause alarming side effects?

The very common complaints about Omega XL are digestive problems.

But it's pretty common and it can easily be avoided.

I would advise that you take it with a meal to avoid the said side effect.

5. How much is the product?

But on Amazon, it can be discounted for around $50.

Other than that, there are no bundles of it being offered.

Up next – I will try to sum up my opinion on Omega XL in 3 ideas.

1. Claims To Be Better

According to its description – this supplements states that it's better than any fish oil supplement:

It does have some studies behind, that's true.

But I personally don't consider it better than most fish oil products.

The high amount of negative reviews it has stand as a proof.

This is a serious issue about this supplement:

This means you should take between 2 and 6 pills a day.

Obviously – for best results, you should take the highest number recommended.

That's what you should have in mind before following the directions.

Honestly – Omega XL is way too pricey for its real value:

Considering its formula, this is way too much.

It does contain a trademark ingredient – but that's not enough.

There are lots of cheaper supplements with more satisfied users.

So Omega XL is definitely not a wise buy from this point of view.

It's not a bad supplement overall – but it's far from a good choice.

And it's clearly not better than most fish oil supplements (as it claims):

Now – I'm not saying Omega XL is a scam.

Since it does work for some people, it's clearly a legit product.

It also has a trustworthy behind (in my opinion), so I couldn't call it a scam.

However – I can't call it a good product either.

Considering the high number of flaws it has, I would surely not recommend it.

So what would I prefer instead? A classic fish oil supplement called Optima Omega-3:

If you want a cheaper alternative that works the same as Omega XL (or even better), that's my top pick.