It's time to review Penetrex Relief Cream – because it's a really popular pain reliever.

But what lies behind its popularity?

Because in terms of effect – it's not as excellent as it seems:

So is Penetrex a scam? Is it only meant to take advantage of people with severe pain?

I tried to analyze every single detail on this product – so here's the truth (+ video).

Note: This review is based on my opinion + research on Penetrex. 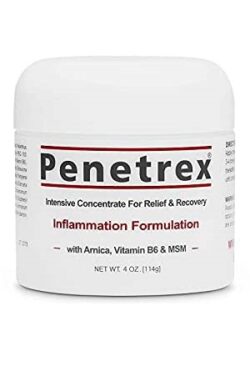 Best Actual Price: Starting from around $25

Cheapest Place To Buy: Probably Amazon (no official website that sells it)

It claims to work for anything from swollen joints to muscle inflammation.

Recommended?: Not completely (unless it's combined with a strong supplement):

To be honest – I would recommend going for a supplement instead (much better effect for the price).

You can also use Penetrex for short-term relief – but make sure to combine it with a supplement.

Penetrex In A Nutshell

However, that's not enough to make it worth the money:

Compared to other creams, it's surely a decent one.

But compared to supplements (that really treat the pain) – it's really far.

So considering its (pretty high) price and short effect – it's not a product I could recommend.

At least not as a #1 choice and not alone.

I will start by giving you a few general info about this product.

How exactly it works, what it promises, who's the company behind, etc.

According to its description – Penetrex was voted “# 1 best overall muscle rub” in 2019:

Now – I cannot disagree with the claims it makes.

And if you ask me, Penetrex is indeed better than most pain relieving creams.

Still – since it's a cream, it only works on the outside (and does not treat the actual cause inside).

That's why I personally don't consider a pain relief treatment.

It is a short-term remedy, but it's not a real treatment.

So to me – its claims aren't that impressive.

The cream is produced by a brand with the same name – which means 2 things:

In terms of reputation – the brand doesn't look very bad.

It does have a pretty long history and a positive feedback.

And since it only makes one product – the positive reviews are most likely related to that.

So if you ask me – Penetrex is a really trustworthy and legit company.

From this point of view, you can purchase from them without any worries.

Basically – you can't tell what's the top ingredient from this product (or its quantity).

As I said, that's something specific for topical products.

But even so – it remains a downside for Penetrex, if you ask me.

Now – I tried to separate its active ingredients from its inactive ones.

So let's take a closer look at each.

Basically – these are the ingredients responsible for Penetrex's effect on pain.

Though there are over 10 different active compounds – most of them have extremely low dosages:

Now – out of the active ingredients, here are the ones I consider the most important:

Other than these, there are 2 ingredients worth mentioning:

Both are some of the best ingredients for joint pain and cartilage damage.

However – their effect seems to be better when used internally (as pills).

That's why I doubt they have any major effect in Penetrex (since there are no dosages either).

These are mostly compounds designed to:

They don't have any effect on pain/inflammation – that's why I won't insist on them too much.

But it's worth mentioning that about 50% of Penetrex's ingredients are inactive.

Penetrex doesn't have a bad formula (compared to other creams).

But in my opinion – it's not very good either:

Besides – half of the ingredients listed are inactive.

So in terms of composition – I wouldn't really recommend it, at least not alone.

It does work, but it's only a very short-term remedy (a few hours, at most).

So unless you associate it with a stronger product (like a supplement) – I wouldn't recommend it.

Here I will try to give you more details on the cream's consistency and how exactly you should apply it.

Penetrex looks pretty good from this point of view:

When it comes to its consistency – it's pretty regular.

It has a white color and a gel-like texture (which makes it soak in faster than most creams).

Also – it doesn't burn or sting when it's applied (which is a real advantage).

However, there's one thing it doesn't mention: how often you can use it.

Since the effect isn't going to last more than a few hours – I assume you can apply the product whenever needed.

That's why I'm not a fan of this cream.

Penetrex is one of the most reviewed pain relieving products from Amazon.

It's true that it has mixed reviews – which is totally normal.

But you can find a lot of info from previous users (both positive and negative).

Note: I only analyzed authentic customer reviews, not promotional ones.

On Amazon – Penetrex has 4.2 stars out of 5, which is a pretty good number.

It means the product itself works (especially since most people are using it for minor issues and short-term relief).

Now – here's what most satisfied users say about Penetrex:

Basically – I found enough reviews of people who were satisfied with this cream.

However, most of them admitted it was only a short-term remedy (effect disappears after a few hours).

But as you might expect – I found lots of complaints about it as well.

Surprisingly or not – there are so many unsatisfied customers:

Overall, I found a lot more complaints than I actually believed.

Besides – many of those users agreed that Penetrex is only a secondary product.

Since it only works for a few hours, it should be combined with something stronger (like supplements).

That's why I don't recommend using this cream as a main treatment either.

Penetrex has mixed reviews on Amazon.

But despite the positive ones, I found a lot more complaints than I expected.

Most people state that the product isn't an actual remedy – just a few hours relief.

Considering its price, I couldn't possibly recommend Penetrex (at least not as a #1 pick).

I personally recommend a supplement instead – because it has a much stronger effect on the long term.

Whether you combine it with Penetrex or not, it's up to you.

But my biggest advice is to go for a supplement as a #1 choice.

Penetrex is quite safe from this point of view.

Just like most creams – it doesn't cause systemic side effects (only local ones at most).

Now, I found very few complaints about its side effects:

To be honest – any cream can cause rashes but in a very low per cent (some under 1%).

So Penetrex does have this risk as well.

But out of 100 people, less than 1% will experience any itching/rashes.

That's why I wouldn't worry too much about this.

If the cream really was dangerous – it would have way more complaints on this.

For the quantity it has, Penetrex isn't necessarily cheap.

It's surely not the priciest cream I cam across – but if you ask me, it could be a few dollars cheaper.

First of all – Penetrex comes in several sizes:

However – since they're all sold on Amazon, they often have discounts.

Besides, you can also find these 3 sizes combined in different packs.

Obviously – the larger the pack, the better the price.

But still, for the quantity it contains – Penetrex is a bit pricey.

I'm not saying it's very expensive (compared to other creams).

But considering its popularity, I think it should be a few dollars cheaper.

Since its effect only lasts for a few hours – I'm not sure it's worth the money.

I won't compare Penetrex with another cream (because creams are not a proper treatment for joint pain).

Instead – I will compare it with my #1 recommended joint product.

I'm talking about a supplement called Joint Support + from Nuzena:

Now – out of these 2, I would strongly recommend going for Nuzena.

It's the best joint supplement in terms of quality/price.

However – you can surely combine it with Penetrex.

So until Nuzena's product starts working (it's going to take a while), you can use Penetrex to keep your pain under control.

Penetrex is quite pricey for its actual value, if you ask me.

Considering that its effect only lasts for a few hours – it's not a product I would recommend.

Not alone, at least.

That's why I strongly suggest you to go for a supplement instead (if you want a real relief).

You can combine it with Penetrex as well (since they work through different mechanism).

But when it comes to using Penetrex alone – I wouldn't recommend that.

Penetrex is one of those creams that is really easy to find (both online and in real life).

Maybe that's because of its popularity – but it's available easily:

However – I'm quite sure that its best price is on Amazon.

That's why it's the retailer I pretty much recommend.

Besides – as I mentioned before, you can get a lower price if you buy different packs.

If $25/bottle is too much for you, that option might be better.

Here's how I would sum up my opinion on Penetrex.

That's why the effect only lasts for a few hours – because the cause isn't treated at all.

In this way, once the numbing effect goes away – the pain returns as strong as before.

Though I personally had a pretty good opinion on this cream, it's not really so (apparently).

Its Amazon reviews are quite mixed up.

And even though more than 60% are positive – there are enough complaints as well.

That's why you should keep this in mind before making any purchase.

3. Pricey For Its Value

In my opinion – Penetrex could be a few dollars cheaper:

Now – this cream is surely a good relieving solution for the short term.

But precisely for this reason, I believe it should cost a bit less.

Short answer: Yes and No.

Normally – it's not a pain relief product I would recommend:

However, I would recommend Penetrex in certain cases.

And by this I mean – if it's combined with a stronger product (like a supplement).

Supplements have a much better effect (in terms of intensity and strength):

The only downside is that supplements need at least a few weeks to start working.

So if you need a fast relief in the meantime, Penetrex can really help.

However – the cream doesn't have a long term effect (so you will have to use it constantly).

That's why using a supplement as your #1 product is much better.