It's time to review New U Life SomaDerm HGH Gel – which looks like a very interesting HGH product:

However – it all comes with a huge price.

And at $170/bottle, SomaDerm is one of the priciest products from the market.

So could it actually be a scam?

I tried to dig really deep into it, so here's the truth behind it (+ video).

Note: This review is based on my opinion + research on SomaDerm. 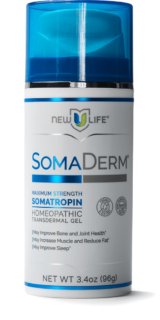 Cheapest Place To Buy: Only available on its official website

Designed For: Increasing HGH – which claims to help with:

I personally recommend a much better alternative instead (which also costs less than half).

However, the way it does this is different from most HGH releasers:

For this reason – it has a higher risk of producing side effects (at least on paper).

And despite trying to look like an amazing product, that's not really the case:

Now – I'm personally not sure whether the product is a scam or not.

But it's definitely based on a MLM pyramid scheme.

So things are not completely legit about it and its effect.

For this reason (and its huge price as well) – it's definitely not a product I would recommend any soon.

For the beginning, here are some general facts on this product:

SomaDerm's mechanism of action is based on “the power of natural growth hormone”:

In other words – it contains a synthetic form of HGH that is absorbed topically.

It also claims to have some unique features:

However, it's worth noting that it's FDA registered (not approved) – which makes a big difference.

Also, topical products tend to have a much weaker effect that oral/injected ones.

Besides – SomaDerm has a homepathic formula, which means it only contains extremely diluted ingredients.

It's true that some people swear by homeopathic products.

But logically speaking – you're getting an insignificant amount of the active ingredients.

That's why I'm personally very hesitant when it comes to homeopathic products.

SomaDerm's producer is a brand called New U Life:

Now – New U Life is definitely not the most famous supplement brand.

The fact that all of its products are very expensive could be a possible explanation for this.

But even so, the brand has enough complaints on BBB (and even a government report).

It wasn't proved that it's a scam (at least yet).

Still – you should consider these facts before making a purchase from New U Life.

SomaDerm has a pretty weak formula, if you ask me.

As I said – homeopathic compositions are highly diluted.

So logically speaking, their potency couldn't be the same as of a more concentrated formula.

At least this is my way of viewing ingredients, as a pharmacist.

Getting back to SomaDerm:

On the other hand, SomaDerm uses a synthetic form of HGH (that is highly diluted).

I personally prefer the first mechanism of action (since it seems a lot safer).

Now – let's take a closer look at the 3 active ingredients from SomaDerm.

This substance is derived from pig adrenal gland.

And as you might expect – its benefits are related to adrenal function:

A 6X dilution means the ingredient was diluted in a ratio of 1:10.

Afterwards, the process was repeated 6 times (that's where the 6 from 6X comes from).

As its name suggests – this ingredient is meant to boost thyroid function:

The dilution of this substance is 10X.

This is basically the main responsible for SomaDerm's effect on HGH.

Somatropin is actually a synthetic form of HGH (HGH is naturally produced by the human body).

Now – synthetic HGH can only be used with a medical prescription.

So the 30X dilution is the lowest dose that can be purchased without a prescription. Still:

Now – homeopathy claims that diluting a substance transfers its active proprieties to the water molecules.

But even so, on paper – the active ingredient has an absolutely insignificant dose.

That's why I personally do not have much trust in homeopathic remedies.

Overall, it's definitely not a product I would recommend anytime soon.

I'm not a fan of homeopathic products, that's for sure.

If you have a better opinion on it, SomaDerm might seem like a more credible product to you.

But from my point of view, it's not worth trying at all.

Even though it's designed to be applied topically, SomaDerm isn't the easiest to use product.

Since it's a homeopathic gel – SomaDerm doesn't have an unpleasant texture:

So it's not the kind of product you want to stop using because of its strong scent, greasy texture, etc.

According to its official website, here's how you should use SomaDerm:

Now – I strongly recommend sticking to 4 pumps per day (not 8).

SomaDerm is a very expensive product, so it's better to avoid paying anything extra.

But even so, it's not the easiest-to-use product (since you have to apply it twice a day).

In order to show you how this product works, I tried to look at its customer feedback.

However – there's very little info on SomaDerm from this point of view.

Note: I only consider authentic reviews, not promotional ones.

SomaDerm isn't sold on any retailer like Amazon, Walmart or others.

Consequently – it doesn't have any customer feedback on those websites (which are known to be legit).

However, you can find a couple of reviews on different websites:

Now – SomaDerm is a MLM product (some sort of pyramid scheme where new people have to make sales in order to grow).

So it's quite obvious that all reviewers are praising it (since their goal is to sell as many products as possible).

Still – New U Life had some legal problems because of SomaDerm:

Therefore, SomaDerm and its producer don't have a very positive customer feedback.

This product has almost no real user opinions.

But when it comes to complaints and legal problems, there are a couple.

Plus – given that it's a MLM product, it's even more obvious most of its customer opinions are biased.

So there's no way I could recommend a product like this one.

As I said – SomaDerm has almost no authentic customer opinion.

So it's very hard to tell whether it causes side effects on a regular basis or not.

However – here's the thing:

It's true that SomaDerm contains a very diluted form of HGH.

So even though it's synthetic, it shouldn't be very dangerous normally.

Still – compared to products that boosts HGH production naturally, a synthetic form of this hormone is definitely less safe.

But which are the side effects it can cause in theory?

Once again – these issues are more common in injections with synthetic HGH (which require a prescription).

SomaDerm contains a much lower doses, that's why the risk is considerably lower.

SomaDerm could be the priciest HGH releasing product from the market.

It's very hard to afford it in the long run, if you ask me.

This product is only sold on its official website.

And just like I mentioned – its price is extremely high.

Basically, there are 2 pricing options:

As I already told you, I don't recommend this product in any way.

But if you really want to give it a try – go for the standard bottle at first.

That especially when its price is a small fortune.

I will only compare SomaDerm with my #1 recommended HGH releaser.

I'm talking about a supplement called GenF20 Plus:

Now – compared to GenF20 Plus, SomaDerm is clearly very inferior.

Not only that its ingredients are on the weaker side, but it also costs more than double.

So it's quite obvious which of these 2 products would make a better choice.

If you ask me – it's clearly overpriced because it's not worth even half of its actual price.

Given that there are many better alternatives for a lower price, I could never recommend it.

Here's how I would sum up my opinion on SomaDerm (in 3 ideas).

SomeDerm is one of the few homeopathic HGH releasers from the market – if not the only one.

As I said, I'm personally not a fan of these types of products:

In my view – the therapeutic power of these products is very low.

This is a crucial aspect when it comes to explaining its user reviews:

SomaDerm is actually a MLM product, meaning people selling it are involved in a pyramid scheme.

They start from the bottle and the more sales they make, the more the advance.

This explains why so many people are praising SomaDerm without having even tried it.

3. Among The Priciest Options

Unfortunately, SomaDerm is one of the most expensive HGH releasers.

But as I said – it's definitely not worth the price.

It's up to you whether you want to give it a try or not.

But in my view, it's way too expensive for its real value.

Short answer: Definitely not worth it.

Some sources claim it might be a scam – and that's totally possible.

But whether it is or not, it's still not worth buying at all:

Honestly – it's a product I would not recommend under any circumstances.

So what should you go for instead?

There are many HGH releasers on the market – but my #1 pick is a product called GenF20 Plus:

It's totally up to you what product you choose to go for.

But I would surely not advise you to pick SomaDerm, it's simply not worth it.