It's time to review Neuriva Brain Supplement – which is one of the most famous nootropics:

But is it really worth the money?

And considering its disappointing formula – could it be a scam?

I analyzed this supplement in detail, so here's the truth behind it (+ video).

Note: This review is based on my opinion + research on Neuriva. 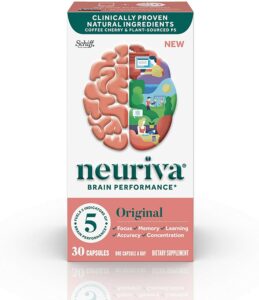 Designed For: Brain performance boost – it promises to:

Recommended?: Not too much (unless you want to experiment with various nootropics):

I personally recommend an alternative with a much better formula.

But this didn't prevent it from becoming really popular. Why exactly?

However – this doesn't mean that Neuriva is a high-quality supplement.

In fact, it's actually quite far from that, if you ask me:

Now – one of the best things about this product is that it comes in 2 versions:

The difference is that the second one contains 3 extra ingredients.

We're only talking about some vitamins, so the improvement isn't huge.

But even so – the Plus version is slightly better overall.

So even though I'm not a fan of Neuriva at all, the Plus version is surely more recommended.

First of all – here are some general things on Neuriva:

According to Schiff's official website – this supplement boosts 6 aspects of brain cognition:

Also – it claims to be gluten and GMO-free, Vegetarian and Decaffeinated.

Now, if you ask me, Neuriva surely helps in all of these chapters.

But unlike many nootropics – it doesn't seem to help against depression, anxiety and other issues.

So it's mostly a cognitive boosting supplement.

Neuriva is made by a brand called Schiff:

I am personally very familiar with this brand, since it's behind many popular supplements for various issues.

So it's surely a very trustworthy company.

Neuriva's composition is pretty disappointing, from my point of view:

Compared to most nootropics – Neuriva's formula seems quite basic.

That's why I don't think it's too help (in terms of brain benefits).

Now – there's also a superior version of this supplement called Neuriva Plus.

It contains 3 additional vitamins, so the overall composition is a bit better.

However, let's take a closer look at its main ingredients.

This ingredient has absolutely no clinical evidence in terms of cognitive benefits.

The only similar substance with studies behind is Whole Coffee Fruit Extract:

Now – the version from Neuriva is probably derived from it.

But it doesn't have absolutely any studies on its cognitive effect.

That's why I doubt this ingredient alone could help a lot.

That's the only classic cognitive ingredient from Neuriva.

It has lots of studies behind – so its brain benefits are widely known:

Also – in terms of dosage, it's one of the few ingredient from Neuriva whose dose is sufficient.

3. Additional Vitamins (Only In Neuriva Plus)

As I said – this improved version of Neuriva contains 3 extra vitamins.

Their brain benefits aren't amazing, but they surely add up:

These 3 ingredients can stimulate brain health, but they have little effect on cognition itself.

So their benefits are not crucial.

But compared to similar products, the effect will surely be weaker.

Also – the Plus version is a bit better (due to its 3 extra vitamins).

But even so, I wouldn't recommend a formula like Neuriva's.

It's simply not worth the shot, in these circumstances.

Most nootropics have some issues at this chapter – but that's not the case of Neuriva.

This supplement is not formulated as tablets – but as gelatin pills:

Also – the pills have a transparent side, so you can see the brownish powder inside.

One of the biggest advantages of Neuriva is its small serving size:

Also – the label recommends taking the pill before bedtime (for best results).

That's pretty uncommon for a nootropic, but it's pretty easy to follow this tip.

I usually analyze a supplement's customer feedback in order to see how it really works.

And that's exactly what I did with Neuriva as well.

Note: I only considered authentic reviews, not promotional ones.

The best thing about Neuriva is that it's also sold on Amazon.

This means it has plenty of legit and authentic customer opinions.

Among its positive reviews, here's what users say about it:

But it was enough for what they needed.

So my final idea is that this product does help the brain (but mostly in a lower degree).

As you can imagine – there are plenty of unsatisfied users as well:

Basically, Neuriva has lots of complaints as well.

Since its formula is pretty basic – it's obvious it's not going to help in anything than minor issues.

So these complaints are definitely true.

Like most supplements, Neuriva has a mixed feedback overall.

However – my conclusion is that it helps people with minor issues mostly.

If you need a potent cognitive booster, it will most likely not be enough.

So I don't recommend it in most cases.

There are better alternative on the market (in terms of quality/price).

Despite looking quite safe at first sight – Neuriva has a couple of complaints at this chapter.

It's true that its formula is quite basic.

So normally – you shouldn't expect any secondary reactions from a composition of this kind.

However – here's what most complaints are about:

Basically – most of the side effects it causes are related to nervous system.

Also, some users claim it interacts with anti-depressants (which is totally possible).

So if you're on a cognitive-related treatment, make sure to ask your doctor before going for Neuriva (or any other nootropic).

Compared to other cognitive supplements, Neuriva is quite affordable actually.

But in terms of value – it's not really worth buying.

I am going to analyze this supplement's price on Amazon:

As I said, $23 is a pretty good price for a nootropic at first sight.

But given Neuriva's ingredients, it's not really worth it.

There's basically only one classic nootropic in this product (Phosphatidylserine).

If you only buy Neuriva for its minor cognitive benefits, it might be worth it.

But if you want a potent nootropic, I don't advise you to spend $23 on it.

I will only compare Neuriva with my #1 recommended cognitive supplement.

Basically – between these 2, Mind Lab Pro is clearly the better option.

But that's only if you need a potent/high-quality nootropic.

If you only want to experiment, Neuriva might be a better choice (due to its low price).

But in terms of quality and strength – don't expect a lot from it.

Neuriva is among those affordable nootropics.

But its value is pretty close to its price.

So I would mostly recommend it for someone who wants to experiment.

If you need a potent cognitive supplement, Neuriva isn't among my top recommendations.

Here's how I would sum up my opinion on Neuriva in 3 ideas.

One of the best things about this product is that you can find it in 2 forms:

I personally recommend the Plus one, because it has a slightly better formula.

But either way – it's good to be able to choose from 2 types.

Neuriva's composition could be a lot better than what it actually is.

And that's mostly available for the original version:

It's true that it's not a pricey supplement at all.

But even so – its formula is not as valuable as it should be, if you ask me.

Due to its pretty basic formula – this supplement works better for small issues like:

In fact – lots of its previous users claim the same.

But it also has a lot of complaints about its lack of effect for long-term memory and so on.

Short answer: Rather not worth it.

It's not a bad supplement but it has a pretty poor formula:

In terms of price – it's actually quite an affordable supplement.

But even so, I would not recommend it as a potent nootropic.

If you only want to experiment with a cognitive supplement – Neuriva should be good enough.

But if you're looking for a quality one, it's not among my recommendations.

So what should you go for instead?

My #1 pick is a supplement called Mind Lab Pro:

So it's totally up to you which of these 2 supplements would make a better choice.