It's time for my Mind Defense review, a cognitive supplement that doesn't look too bad.

But is it worth the high price?

And are there any chances that it's a scam?

At first sight – there isn't anything special about it.

For this reason, I tried to find out the truth behind each of its features.

Note: This review is based on my opinion + research on Mind Defense. 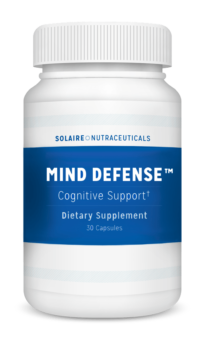 Designed For: Cognitive and memory support

It claims to promote a healthy brain and focus/attention.

Recommended?: No – it's simply not valuable enough:

I personally recommend a cheaper alternative with a much better formula.

Here are some general things you should know about Mind Defense:

This supplement is mostly focused on improving cognition:

Unlike most nootropics – it's not helpful for extra issues like anxiety, depression, etc.

And like other products from this brand, its official page offers very little info about it.

So you can't find out a lot about its promises, composition, etc.

This is a US-based brand that has several other supplements in its portofolio:

In terms of reputation – it looks quite trustworthy overall.

However, most of its supplements are quite pricey (especially for their real value).

That's why I'm not a fan of Gold Leaf Nutritionals.

Mind Defense's composition is pretty weak (compared to other nootropics):

However – it's about the same as the other cognitive supplements from Gold Leaf Nutritionals.

So let's take a closer look at its main ingredients.

This vitamin is not essential in terms of brain benefits.

It's extremely helpful for general health, that's for sure.

But in terms of cognition – it has a moderate effect in boosting memory and focus.

However, it does have some benefits:

Folic Acid is another ingredient without a major cognitive role.

Apparently – it mostly helps against brain aging and promotes circulation.

This form of vitamin B is a lot more important than the previous ones.

Also – this product contains the stronger version of vitamin B12 (methylcobalamine).

This herb is one of the most common nootropics in cognitive supplements.

And that's mostly because of its excellent proprieties:

In terms of dosage – this ingredient brings the optimal quantity of Bacopa.

The full name of this compound is Cera-Q Silk Protein Hydrolysate:

Also – this exact compound is a trademark version.

This means it has a superior effect (compared to the classic form).

Overall – Mind Defense's formula is rather basic than advanced:

Compared to most nootropics from the market, Mind Defense is surely not worth it.

Mind Defense is formulated as capsules:

There's no picture of the pills on its official website, though.

However, judging after their description – swallowing them shouldn't be too hard.

This supplement has a major advantage here.

That's because its serving size is only one pill daily:

Most nootropics require at least 2 pills daily (while some require even 7).

So this is a great advantage of Mind Defense.

In order to see if this product works or not, I will look at its customer feedback.

In this way – you can get an unbiased perspective on it.

Note: I only analyzed authentic reviews, not promotional ones.

Mind Defense has the same problem as the other products from Gold Leaf Nutritionals:

Basically – there are only about 6 opinions on its official website.

I personally believe they are biased, especially since there's no way to write your own review.

Plus – they are all very positive and highly praising the supplement.

However, it's totally up to you whether you believe them or not:

As I said – I can't tell whether these opinions are real or not.

But it's your decision if you trust them or not.

Like many similar products, Mind Defense has some issues at this chapter.

Since most of its reviews could be biased – it's not a nootropic I would trust.

So from this point of view, I would surely not recommend it.

Especially when there's a cheaper alternative with a much better formula.

On paper, Mind Defense should be on the safe side from this point of view:

Also – cognitive supplements aren't famous for causing a lot of side effects.

Since Mind Defense doesn't even have a potent formula, this shouldn't be the case at all.

So you shouldn't worry too much from this point of view.

Nootropics tend to be expensive in general and Mind Defense makes no exception.

In fact – I consider it quite overpriced for its actual value.

As I said – this supplement is only available on Gold Leaf Nutritionals' official website:

But compared to others, Mind Defense is surely not worth so much.

That's why I don't think this price is fair at all.

So I could not recommend it at this price under any circumstances.

I will only compare Mind Defense with my #1 recommended nootropic.

Basically – Mind Defense is pricier than my top recommended nootropic.

However, it's far from as valuable as it (in terms of ingredients).

So out of these 2 products, it's obvious I would go for Mind Lab Pro.

Mind Defense is too pricey for what it should be.

Its formula is pretty basic and it shouldn't cost above $25, if you ask me.

So there's no way I could recommend this supplement (especially when there are much better options).

Here's how I would sum up my opinion on Mind Defense in 3 ideas.

This supplement's ingredients could be a lot better overall:

So it's surely not among the best compositions I came across.

That's the typical problem of many nootropics:

In Mind Defense's case, there are only 6 opinions on its official page.

But as you can guess – all of them seem biased and false positive.

In my opinion, Mind Defense is way too expensive for what it should be.

Its formula and value are pretty low.

So in terms of price, it should cost half than its current one – if you ask me.

It's not a scam, as some sources claim – but it's far from being worth buying either:

It's definitely not the worst nootropic from the market.

So there's no way I could recommend a product of this type.

Instead – my #1 alternative is a supplement called Mind Lab Pro: