It's time to review Nutrafol Hair Growth (for men), which is a super popular product.
But is it effective for male pattern hair loss?Not really, I would say:

So is Nutrafol for men a scam – or does it have any chances to work?

Well, you're going to find out in the following lines.

Note: This review is based on my opinion + research on Nutrafol for men. 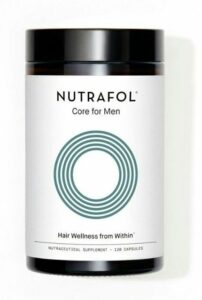 It's only a bit cheaper if you sign up for auto-shipping (but it's not really worth it).

Cheapest Place To Buy: Its official website or Amazon

It costs about the same on both.

Designed For: Growing hair and reducing hair fall – it claims to:

Recommended?: Not completely – it can help with growth, but not with hair loss:

Instead, I advise you to go for a product specially designed for male pattern hair loss.

It's by far the best one from the market.

Nutrafol For Men In A Nutshell

Shortly – Nutrafol is a product designed to grow hair in men.

Consequently – it also claims to be helpful against male hair loss, which I don't really agree with.

In fact, it's the same reason why I don't think that Nutrafol for men is really worth buying:

So Nutrafol cannot block DHT as well as other supplements that are specially designed for that.

That’s why I don’t recommend it for male pattern hair loss.

It can help partially, but it’s not going to stop your hair loss completely or for the long run.

However, it can help in other cases:

Still, it’s not a product I would necessarily recommend even in this cases.

That's because it lacks a lot of ingredients and it’s super expensive for what it offers.

You can actually find some much better options for over half of Nutrafol’s price.

So even though it’s helpful, it’s just not worth the money.

Let's begin with some general facts on Nutrafol for men:

Nutrafol's male version is pretty similar to its 3 female ones.

The difference lies mostly in some of its ingredients' dosages.

But other than that – the male version has about the same mechanism of action:

It can definitely help hair that is pretty healthy (in terms of faster growth and thickness).

But it doesn't help with most cases of male hair loss.

And that's simply because it doesn't target the main cause of hair loss in men (DHT excess).

So it surely helps from other points of view – but it doesn't make miracles for hair loss.

Nutrafol isn't extremely transparent at this chapter, if you ask me.

Its producer is a brand called Nutraceutical Wellness:

Now, Nutrafol is definitely not a scam or a questionable product.

It's been on the market for many years.

If it was a sketchy supplement, it wouldn't have become so popular.

However, I'm not a big fan of its producing company.

The reason why I rated this formula so highly is its ingredients diversity.

It contains a multitude of substances (more or less helpful).

But other than that, it's pretty disappointing to me:

And the point is that Nutrafol’s ingredients cannot treat the main causes of hair loss in men:

It's mostly helpful for your hair loss is caused by vitamin D or zinc deficiency.

But those are 5% of all cases of hair loss in men, maybe even less.

That’s why I don’t consider its formulation very impressive.

It’s indeed great for growing hair that is already healthy, but that’s pretty much it.

Iron is probably the most important nutrient in terms of hair health. [1]

But let's take a look at the 4 vitamins it contains:

The first 2 don’t have much to do with hair, so I still question their role here.

Vitamin D is indeed linked to hair loss, but it doesn’t make hair fall out as much as it’s blamed to.

Biotin is indeed important for the hair, but the dose here is way too much:

As for the minerals, there’s zinc, selenium and iodine.

But again – there’s no iron, which pretty much cancels the benefits of the others.

This is an original mix of ingredients that is specific to Nutrafol.

What I mean is that you can only find it in this supplement.

Now – the mix itself isn't too impressive:

Additionally, there are other compounds like Hyaluronic Acid, Marine Collagen, Curcumin or Ashwagandha.

Now, all of them are super helpful in terms of health benefits.

But they simply don’t do much for hair.

That's why I don’t really understand their goal in Nutrafol.

Just like the complex above, Nutrafol's blend doesn't look too spectacular either:

Honestly, a person that isn’t really familiar with supplements may be really impressed by these ingredients.

But the reality is that in terms of hair benefits exclusively, most of them aren’t very helpful.

But other than that – most of its ingredients don't have too many hair benefits.

So as a hair supplement, it's far from impressive.

There are products with way better formulas for a lot less money.

When it comes to how you should take it, things could be better for Nutrafol.

This supplement is designed as the classic vegetable capsules:

But things are less pleasant when it comes to its serving size.

It requires 4 pills everyday, which is a lot and it’s really hard to take.

So I consider it quite uncomfortable in the long run.

A lot of its users complain about this aspect, to be honest.

So in my view, it's a really big downside for this supplement.

Previous users' opinions are the best way to see if a product works.

And fortunately – I received a lot of opinions about Nutrafol.

Nutrafol has a lot of user opinions on Amazon:

But it's useless for people with hair loss caused by an excess in this level.

That's why its opinions are quite mixed up.

So if your hair is healthy or falling out from other causes, Nutrafol will probably help.

But at least 80% of male hair loss cases are caused by DHT excess.

So in these situations, Nutrafol won't do much (as it doesn't block this excess).

I had several readers getting back to me with their experiences with Nutrafol.

I also have an experience from an anonymous reader:

And lastly – I received Carl's story: 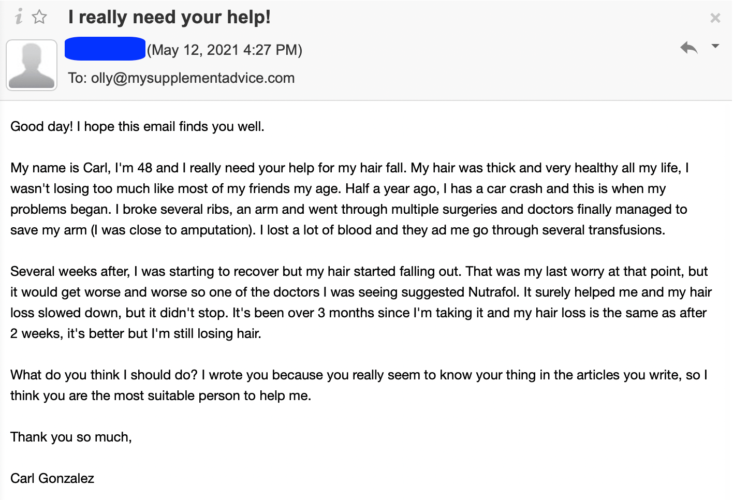 So honestly, Nutrafol for men can be effective in some cases.

That's mostly if you lack selenium, zinc and a few nutrients that it also contains.

But those cases are less than 10%.

So in the other 90%, it’s not really effective because it’s not targeted to treat the real cause (DHT excess).

And that’s exactly why I could’t recommend it.

But it won't reduce your hair loss, in most cases.

That's why I recommend you to go for a product that treats DHT excess directly.

That's the only way to treat your male pattern hair loss directly.

In terms of side reactions, Nutrafol is pretty well tolerated overall.

I couldn’t find too many complaints on secondary reactions from men who tried it.

However, it contains a huge amount of biotin:

So it’s mostly this huge amount of biotin that makes me a bit worries.

And that’s why I wouldn’t recommend Nutrafol to men who have a history of acne.

That's because it may increase the risk a lot.

One more thing I want to point out is that it require 4 pills everyday.

Honestly, that's a lot and it’s really hard to take.

So I consider it quite uncomfortable in the long run.

I have to criticize Nutrafol once again when it comes to its price.

That's because it’s extremely expensive for what it offers.

As I said, Nutrafol is not a very strong DHT blocker.

Plus, it doesn’t contain iron, which is an essential mineral for hair.

Besides, its formula isn’t very potent either.

And even so, its pricing is way higher than that of almost any hair supplement:

Nutrafol's male version is extremely overpriced (for its real value).

And even at its lowest price, it's still very expensive.

Plus, there’s no way I can advise you to go for auto-shipping directly.

This product may not even help you at all.

And it’s too pricey to take the risk, so I would surely not go for it.

I only want to compare Nutrafol with my top recommended product for male pattern hair loss.

Now, if you only want to grow your healthy hair out, Nutrafol is a good option.

But if you're dealing with male pattern hair loss – I surely don't recommend it.

Happy Head's formula is the best product I know for this condition.

Compared to Nutrafol – its results are way better.

Nutrafol is super pricey for its real value.

It's only a hair growth supplement – but it costs even double than similar products.

Consider its benefits, it's not worth so much.

If you want a product that will really stop your hair loss, try a more specific alternative.

Here's how I would summarize my opinion on Nutrafol for men (in 3 ideas).

It can indeed boost hair growth, but that's all.

So if your hair is falling out due to DHT excess, Nutrafol isn't going to help.

This supplement requires nothing less than 4 pills everyday.

So that's surely a potential downside for me.

Given its composition, Nutrafol is way too expensive:

Besides, most hair growth supplements have a better composition.

And guess what? Their price isn't even close.

It's probably not going to help you.

In the best case – it could work partially:

Now – Nutrafol can definitely help with growing your hair faster.

But that's mostly if your hair is already healthy (or at least in a good shape).

Plus, if you're dealing with hair loss caused by a lack of vitamin D or zinc, it might help.

But those cases are pretty rare.

So in most cases, it’s not going to help too much.

Now – if you’re dealing with male pattern baldness, DHT blockers are what you actually need.

You need something that would block your excess DHT and prevent it from affecting your hair anymore.

So what do I recommend instead? A brand called Happy Head:

Since it's also cheaper, it makes a much better option for your case.

So I definitely advise you to give it a try.