Is it going to be a game-changer for severe pain?:

Now – is this cream worth it? Does it come with any side effects?

Let's dig deep into it, in order to see its real features in this review.

Note: This review is based on my opinion + research on Magnilife Pain Relieving Foot Cream. 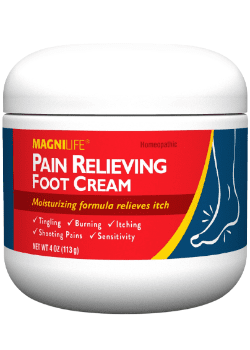 Designed For: Reducing pain, as well as some other benefits:

Recommended?: Not completely – I found some disadvantages about it:

Instead – I recommend that you try a much better topical pain reliever that I absolutely love.

It will relieve your pain much faster (and for longer).

Magnilife Cream In A Nutshell

It focuses on different types of foot pain.

Also – it has several different versions:

But for this review, we will focus on the original version.

Now – its overall formula is not that bad.

But honestly, it looks more like a moisturizing lotion (in my view).

In terms of pain relieving effects, they don't last that long.

That's pretty normal for a cream designed to hide the pain, not to actually treat its cause.

But Magnilife's effect is even shorter than that of other similar creams.

So you need to reapply it a lot of times in order to maintain its pain relieving effect.

The reason is probably because of its homeopathic (aka very diluted) formula.

Also – I found some other red flags about it:

Shortly – if you're suffering from pain in other parts of your body, it's not too helpful.

This doesn't make a lot of sense, because that's still pain, right?

However, it seems like it's not very effective for pain located anywhere else than your feet.

But you can find more bundles on its website.

So if your only problem is foot pain, it could be a good option.

However, if you have other body aches, you will need other products.

And that's why I recommend that you go straight for a more versatile alternative.

It's more practical and it will save you more time.

Let's first take a look at some general info about Magnilife:

It has two versions in different formulations:

The “Db” stands for versions suitable for diabetic skin.

But in this review, we will focus on the original Pain Relieving Foot Cream.

Now – normally, you could use it for any part of your body you want.

Basically, the pain is the same, right?

But apparently, Magnilife isn't very effective for pain outside your feet.

Anyway – here are the claims of this product:

In my view, it looks like a normal pain relief foot cream.

So if you're dealing with regular foot pain, I'm pretty sure it would help.

But honestly, I'm not a big fan of it because it's only limited to one area of use.

It's not exactly ideal if you're dealing with other types of body pain.

So you would need to buy different products for all the other types of pain, which is not okay.

Other than that, it's not a bad cream.

But I would still prefer an all-around type of product.

It's a lot more practical in different aspects.

The company behind MagniLife is The Magni Group.

It's a pretty known brand at this point.

In my view, the company itself doesn't look sketchy at all.

So you can guarantee that you will get a legit product.

Just make sure to buy from the official website or from any official stores.

Here's an overview of Magnilife's formula:

One thing worth mentioning is that its formula is homeopathic.

Personally, I'm not a big fan of homeopathic medicines, simply because the ingredients are extremely diluted.

So they basically have an insignificant concentration (compared to non-homeopathic creams).

Back to its formula, I appreciate that its active compounds are separated from the inactive ones.

But other than that, I'm not very impressed:

But the overall formula is not too potent.

Since its active ingredients are homeopathic, I can't even say I'm surprised.

So if you're curious, let's take a look closer at each compound.

That's because they are the only ones responsible for this cream's pain relieving effect:

Now – all of the doses of these ingredients are given in HPUS.

This indicates the potency of these compounds in homeopathy.

But as I said – their real effect is pretty different, as they are extremely diluted.

Since I'm not a big fan of homeopathy, I doubt they can do much.

Just compare these insignificant doses with those of some non-homeopathic ingredients.

Trust me, the difference is going to be a huge one.

Now, here are the notable inactive compounds of Magnilife :

As you can see, they are mostly moisturisers and coolers.

So don't expect them to be very potent, because they can't really relieve pain.

But still – you can somehow get some benefits from them.

Its clear focus is only on foot pain – just like its claims.

However – most of its ingredients are inactive.

And its few active ingredients are actually homeopathic, so extremely diluted.

That's why I would certainly not buy it.

Honestly, it looks more like a typical body lotion.

So it might feel quite heavy when you put it on the skin.

You just need to apply the cream twice daily.

You need to massage it to your feet, heels and toes.

Also – if needed, you can apply it on your legs.

Honestly, it's not very hard to use on a daily basis.

But since its effect lasts very little, you will need to reapply it more than twice a day.

Other than that, its instructions are no different from other topical products.

Fortunately – Magnilife Cream has a lot of customer reviews.

So we can see how it performed for people who used it.

But I would prefer to feature the comments on Amazon.

I just think that the testimonies there are more legitimate and honest.

So here are the things people liked about it:

The overall rating of the product is 4.2 out of 5 stars.

As you can see, a lot of people who tried it said that it worked.

Most were satisfied with it in terms of relieving different types of foot pain.

So we can say that it somehow delivers its claims.

So here are the things other people didn't like about it:

Also, the effects are just temporary and sometimes last for a few minutes only.

So if you need a stronger pain relief, it's probably not what you're looking for.

Based on the reviews, Magnilife Cream works in some cases.

But it's only for not-so-serious foot pain.

Also – the effects will not last long, so be ready to apply it many times per day.

Given these issues, I would surely go for a more potent pain reliever.

I only saw some minor complaints about Magnilife:

That's quite understandable and really depends on a person's preference.

Magnilife doesn't have the nicest fragrance out there, that's for sure.

But other than that – it can't really cause some alarming adverse reactions.

It's just a topical product.

The worst thing it can cause would be an allergy or irritation, but those are mostly local.

That's why I would say that Magnilife is safe to use.

But that's only if you're dealing with foot pain alone.

Now – the lowest price of Magnilife is on Amazon.

A regular jar (4 oz) only costs $14.20 and there are some further discounts upon subscription.

Again – this cream is only made to address foot pain.

So its price is pretty good if that's your only problem.

But if you have other types of pain in other areas, you need to buy some other products for that.

Not to mention that its pain relieving effect don't last long.

Obviously, this only means that you will have to reapply it a lot of times in a day.

So don't expect one jar to last for too long.

Not to mention that applying it constantly is pretty uncomfortable.

So what alternative do I suggest instead?

I would say Cool Relief, as it's my top recommended topical pain reliever:

But keep in mind that it's designed for all types of pain.

So you don't really need to use anything else.

That's why buying it is a much more practical choice.

Besides, its effect lasts a lot longer – so you only need to apply it very few times a day (sometimes even once).

That's why it's the product I recommend, since it's more worth it.

In my view, Magnilife Cream is affordable.

But that's only if you're dealing with foot pain alone.

If you're after a product for all parts of your body, you're not going to like it too much.

It's better to look for all-around pain reliever instead.

Let me share with you the summary of my thoughts on Magnilife.

So Magnilife's formula has 3 category of ingredients:

If you ask me, the ingredients are pretty common for a pain relief cream.

However – I'm disappointed by its very diluted active ingredients.

That's why I don't see this cream as being very potent and long-lasting.

Obviously – Magnilife focuses only on one area.

It's only designed to relieve foot pain – such as burning sensations and itching.

So you can't really find it useful for pain in other parts of your body.

It's not me saying this, it's its previous users.

If you're still spending some money – why not go for a cream that relieves pain in all areas?

Now – Magnilife Cream is not expensive.

You can find it a very good deal if you're only dealing with foot pain.

But in order to get a constant effect, you need to reapply it very often (it's pretty weak).

Also – you need to buy other products if you have pain in other areas.

So you will probably end up spending a lot more overall.

Short answer: Not at all – I'm not a big fan of this cream under any circumstances:

In my opinion, Magnilife is not a bad product.

It has its own good points and a couple of satisfied users.

But it's mostly helpful if you're dealing with foot pain.

So if that's your only problem – its price could be worth it.

However – if you're dealing with pain in other areas (or intense foot pain), I don't recommend it.

It's most likely not going to work.

What product do I suggest instead?

It's called Cool Relief and it's my top recommended topical pain reliever:

Again – Cool Relief is not only made for foot pain.

You can also use it in any parts of your body – even for muscles and joints.

So it's safe to say that its price is worth it.

Also, you don't need a lot of product and that makes a bottle last longer.

I'm definitely a big fan of this cream, because its amazing effect speaks for itself.