It’s time for my Emtrix Nail Fungus review – which looks like an interesting product.

However, does it really get rid of fungus? Or is it just an overhyped treatment?:

So let's find out if this product really works for fungus in this review.

Note: This review is based on my opinion + research on Emtrix Nail Fungus. 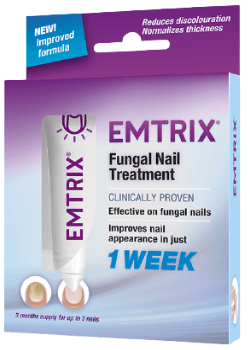 Designed For: Treating nail infections – such as:

Even though its label claims to be a “fungal nail treatment”, it's not necessarily a product designed for this only.

Recommended?: Not really – there are some major disadvantages to it:

Instead – when it comes to fungal infections, I recommend you the best fungus supplement from the market.

Emtrix Nail Fungus claims to be an anti-fungal treatment.

But after my careful research, it doesn't really look like one.

That's because it's more effective as a nail treatment only.

In other words – it's not very helpful for nail fungus specifically.

Now, there are 2 versions of Emtrix:

For this review, I will focus on the first one – since it's meant for fungus.

But as I said – there are several factors why I didn't like it:

Honestly – it's not the best deal, considering the fact that there are many cheaper/larger option.

So overall – I'm not saying that Emtrix is a bad product.

However, it's far from being the best from the market.

Let's start with some things you should know about Emtrix:

The first one is by far the most important (and popular), so I will focus on it throughout this review.

Now, according to its details – this product seems to have one strong claim.

It states to “improve nail appearance in just one week.”

But what do these improvements include?:

Honestly, I think Emtrix is pretty much the same as Kerasal (which is made by the same company).

If you read its description carefully, it treats nails affected by fungus or psoriasis.

However – it doesn't claim to destroy fungus build-up.

That's because it doesn't really do this in reality.

So it's more of a short-term remedy even for nail fungus, that's why I'm not a big fan of it.

Now – Emtrix Nail Fungus is made by Advantice Health, LLC.

Like I said, it's the same company that makes Kerasal Nail Fungus.

All in all, it's a pretty trusted brand – so it's safe to buy their products.

Honestly – Emtrix has the same set of ingredients as that of Kerasal.

So I assume that it has about the same effect and it works in the same manner.

Like in Kerasal's case, I can't say I'm a big fan of this formula:

In other words – it contains the same formula as many other products out there.

There isn't anything special inside it.

So whether you go for this product or for any other similar one, there's no difference.

But let's still take a look at the major ingredients inside Emtrix:

Now – these ingredients have a tendency to fight off nail fungus.

But they are not strong enough to remove and cure the infection, in my view.

So overall, Emtrix can be very effective in treating your nails' appearance.

But don't expect it to destroy all traces of fungus inside your body.

That's why I don't consider it too promising.

The set of ingredients inside both products are the same.

I'm sure Emtrix's formula can work fast – but for the nails in general (not for fungal infections necessarily).

So I suggest you look for alternatives that can destroy fungal residues for real.

So far – these are things you should know about Emtrix at this chapter.

Let me describe the product first:

Again – it smells and feels pretty much the same like Kerasal, so it has the same appearance.

Based on the product's website, here's how you should use Emtrix :

Now – the product doesn't seem hard to use.

You just have to apply it every day and wait for it to dry out.

So if you have some minor nail issues, it wouldn't be a problem for you.

For this chapter, I checked out the reviews for Emtrix Nail Fungus.

The purpose of this is to show you how the product really works.

Out of all online retailers, I chose to show you the reviews on Amazon.

So let's take a look at what most of the customers liked about it:

The overall rating of Emtrix Nail Fungus is 4.2 stars out of 5.

Now – there are a lot of customers who said that it works with fungus too.

But they mentioned that it takes time to give results.

So it's safe to assume that it has higher doses than Kerasal.

Meanwhile, here are some complaints from other people:

I kind of expected to find reviews saying that it's only effective in the nails.

The product has almost the same formula as Kerasal.

For this reason – it's not strong enough to remove the fungus.

Overall – Emtrix is not a bad product.

A lot of previous buyers said that it worked and it made their nails healthy again.

However, don't expect it to work fast – or to remove your fungus completely.

It can treat your infection, but it has all chances to return at one point (because the product doesn't destroy the build-up).

After reading the reviews, I only saw 1-2 complaints about Emtrix related to side reactions.

Both of them said that the product made their fungal infection worse.

If you ask me, this could happen if your nail issues are pretty severe.

So I would say that these side effects are rather rare.

Usually – products like Emtrix cause reactions of this type:

These reactions are normal, since the product promotes nail renewal.

So I suggest you not to panic if anything like this comes up – unless it involves severe bleeding.

If you ask me, I would say that Emtrix Nail Fungus is a little pricey.

So I believe it's not a good choice for now.

In other words – unless you're from the UK, you will pay an extra shipping fee.

That's available for people located in the US as well, which isn't fair at all (if you ask me).

Just so you know, one tube contains 10 ml of product.

So if you consider its price and volume, it's not really the best deal.

That's why it's not one of my top recommended products (not even close).

Now – I have a better option for you and it's the best fungus supplement I know.

But if you examine both products, Urgent Fungus Destroyer is clearly better.

The supplement's formula is dedicated to fighting off the fungus all over the body.

Most fungus products out there are far from that.

So it's clearly a good reason why it's my #1 choice.

Overall – the price of Emtrix is not the best deal from the market.

That especially since it's not strong enough to treat and remove nail fungus.

So honestly, I would say that there's a better alternative out there.

Let me give you my summarized thoughts about Emtrix.

Emtrix has good ingredients when it comes to nail renewal and restoration.

However – it's not the best as an anti-fungal treatment.

It might work, but don't expect to see some positive results in the long run.

That's because it won't destroy the remaining fungus traces.

Emtrix is made by Advantice Health, which is a trusted brand.

I researched the company and so far, there's a lot of positive feedback about it.

So it's safe to say that the product is legit and it's not a scam.

Unlike Kerasal, Emtrix is a little pricey.

Even though they have about the same formula, Emtrix does cost a few dollars more.

That's quite pricey, considering the fact that there's an alternative with a lower price.

Short answer: Not quite – these are the issues I found about it:

Emtrix Nail Fungus is not a horrible product ,but it's not the best either.

It's good for making your nails healthy and bringing them “back to life” again.

But I don't think it's strong enough to treat fungal infections.

So if you're looking for the best of both worlds, try my #1 recommendation.

It doesn't only treat the outside infection – but it also prevents future outbreaks.

Also for its price, you get a quality product with promising formula.

So overall – Urgent Fungus Destroyer is the best option for me.