It’s time to review Pure Health Fungus Eliminator – so does this product work?

Let's see if it's a proper toenail treatment:

Judging after its features, I wasn't too impressed by it.

It's rather pricey for what it contains and it didn't really work in most users.

But let's dig deeper into it and find out the truth behind.

Note: This review is based on my opinion + research on this product. 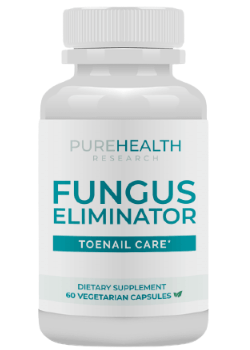 Recommended?: Not quite – even though it's not a bad product at all.

However, I found a few downsides about it:

So it's not the best choice for your toenail fungus.

Instead – I advise you to try the best fungus supplement from the market, since it has a lot more benefits.

Fungus Eliminator In A Nutshell

It focuses on treating nail fungus and boosting immunity.

But that's only on theory.

That's because in reality – its formula doesn't look like that of an anti-fungus product.

However – there are some things to keep in mind:

The good thing about it is that there isn't any serious complaint about its side effects.

Also – you need 2 capsules daily, which isn't too hard.

However – it's a little pricey for me, considering that it only treats nail fungus.

So even though it's not a bad product at all, it wouldn't be among my top picks.

There are simply better alternatives that can treat all types of fungus (not just nail ones).

But even so – it's definitely not a scam.

Here are the first things you should know about Fungus Eliminator:

Based on its official website, this product “combines 9 natural fungus fighters.”

Those are considered immunity-enhancing botanicals.

Now – here are the benefits of these fungus fighters (on paper):

The product also claims to be gluten, dairy and soy-free, as well as vegan.

So if you ask me, Fungus Eliminator looks like a classic general health product:

But it doesn't seem strong enough to get rid of toenail fungus very fast.

The brand behind Fungus Eliminator is PureHealth Research.

Based on my research, here's what you need to know:

If I had to judge it, I would say that the company can be trusted.

Also – there area lot of people who proved that it's not a scam.

So you can safely buy from this brand and you will get your orders.

As expected, Fungus Eliminator is made of natural ingredients.

However – its formula looks pretty disappointing.

That's because it's pretty plain and simple.

In fact – judging after its formula, I couldn't really tell that it's a fungus supplement:

So in terms of composition – I consider it pretty weak.

That's why I wouldn't expect it to remove fungus too well (or too fast).

But let's find out what the benefits of its ingredients:

Other ingredients include gelatin, brown rice flour and magnesium stearate.

But these are responsible for the capsule itself (so they have no active effect).

Now – as you can tell, these ingredients have some basic anti-fungal proprieties.

That's why I don't consider them strong enough.

They can surely help with the immune system.

But when it comes to fungal infections, they are pretty weak and disappointing.

Overall – I would consider Fungus Eliminator's formula is way too basic.

Again, it looks great for a general health product (or for an immunity one).

But as an anti-fungus supplement, it's very weak.

So there's no way I could recommend it.

Here are some characteristics of Fungus Eliminator.

Here's how I would describe this product's texture:

Honestly – it really looks like a typical herbal supplement, so there's nothing special about it.

Now – the usage instructions are quite easy to follow.

You only need to take 2 capsules daily (with meal and water).

Still, there's no specific direction on whether you need to space them out or not.

Also, it's suggested to take Fungus Eliminator for the long term.

The goal is to get some optimal and consistent results.

Overall – I would say it's not hard to take, especially if you're used to taking supplements.

Honestly – the only downside about Fungus Eliminator are its reviews.

There are very few honest comments about it (outside its website).

So let's try to see how it works for other people.

Now – I usually avoid considering the reviews from the official website.

The reason is that those opinions can be very biased.

So as much as possible, I check out the testimonials on the online marketplaces.

Here are the reviews from some previous customers on Amazon:

The highest rating Pure Health Fungus Eliminator got on Amazon is 4.0/5 stars.

Meanwhile, it got 4.9 stars out of 5 on its official website.

I'm not saying that the higher rating is entirely biased.

But I just think that we get to see more honest reviews outside its site.

So all in all – this product seems to work in many cases, but it's pretty slow.

So it's obvious why I'm not a big fan of it at all.

Overall – Fungus Eliminator is not a bad product.

There are people who really liked its effect on their toenail fungus.

But as most said, it takes a long while to see some results.

That's why I suggest you to go for some better products with a more versatile effect.

This means that it has very little chances of causing side effects.

However – I already said that it has a pretty basic formula.

And if you ask me, it might be too weak for moderate to severe cases.

But based on its positive feedback, I would say that it's safe to use:

But overall – Pure Health's Fungus Eliminator doesn't cause any alarming side reactions.

Fungus Eliminator is quite expensive for its formula and mechanism of action.

In other words, I don't consider it worth so much.

So I would say that it's not the best deal so far.

But I will feature the deals on its official website (since the prices are better there).

So here are the buying options you have:

If you're planning to get some discounts, you can save 10% more if you subscribe.

Again – Fungus Eliminator is not a bad product.

However, you can get a more versatile product at the same price.

Also, this product doesn't seem to be working very fast.

So don't expect to see any huge results from your first bottle.

For this reason – it can get a lot pricier in the long run (as you can see faster results with other products).

I have a more versatile suggestion, it's the best fungus supplement I know.

Although both products are effective, Urgent Fungus Destroyer is the better option.

It has a wide variety of benefits and it can treat fungus all over the body.

So I believe it's the better investment.

Its standard price is a bit higher, but it costs the same as Fungus Eliminator with the largest package.

But it's a lot better overall.

All in all – the price of Fungus Eliminator is decent.

However, considering its value and ingredients – it's way too high.

That's because there are better alternatives within the same price range.

That's why I couldn't really recommend it.

Listed below are the common questions you might have about Fungus Eliminator.

Note: I might repeat something I already mentioned, but it's easier to spot here.

1. What is it designed for?

Fungus Eliminator is an anti-fungus supplement.

But it only works mostly for nail fungus.

Also, it doesn't work too well for fungal infections outside the toenails.

2. How do you take this product?

You can take Fungus Eliminator once a day.

To be specific, it requires taking 2 capsules on a daily basis.

3. How long should I use this product?

According to Fungus Eliminator's website, it requires a long-term use.

There's no specific timeline, it just recommends taking it consistently for a long time.

The reason is for you to get the optimal results.

4. Are there any serious side reactions?

The formula of Fungus Eliminator is herbal-based.

So the worst thing that one can experience is an allergic reaction.

But this still depends if the person using it is allergic to one of the herbs.

Other than that, there are no reported alarming side reactions to it.

5. Does it come in bundles?

Yes, Fungus Eliminator comes in 3 packages available on its website:

You can also get a 10% discount if you subscribe to its program.

Here is my summarized opinions about Fungus Eliminator.

Pure Health's is made of 9 ingredients.

All of them are natural and herbal-based – so they look great at first sight:

However – as an anti-fungus product, this formula looks terrible.

That's because it's not strong enough to destroy fungus completely (at least not very fast).

The biggest downside about Fungus Eliminator is the lack of reviews.

There are comments on its official website, but I still prefer the ones outside.

But in these case, there are very few.

And usually – testimonials from online marketplaces are more honest.

There are bundles and discounts available – but I still don't think it's the best choice.

There are some more versatile options in the same price range.

Short answer: Not quite – it's not a bad product, but it's far from a great one:

Again – I'm not saying that it's a bad product.

Actually, it's a decent one as a general health supplement – but it's not a great anti-fungus one.

It's up to you if you want to try it out.

But I have a very good alternative within the same price range.

Now, I recommend Urgent Fungus Destroyer instead, because it's made for all types of fungus.

For this price, you can get rid of any fungal infection.

That's why it's I think it's the best investment of your money.

30 thoughts on “Pure Health Fungus Eliminator Review – Scam Or Does It Work? (Ingredients, Side Effects )”