It's time for my SeroVital review, which is one of the most popular anti-aging supplements.

But if you take a closer look – it might be a scam:

So is this product potentially dangerous?

Well – I tried to dig really deep into it, so here's what I discovered (+ video).

Note: This review is based on my opinion + research on SeroVital. 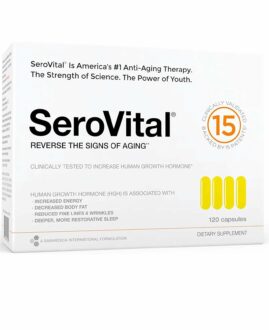 Designed For: Anti-aging prevention and reduction – according to its claims:

Recommended?: No, for sure – it's far from a high-quality product:

Instead – I recommend a cheaper alternative with a much higher rate of satisfied users.

Shortly – SeroVital is an anti-aging supplement that claims to have some unique benefits.

But judging after its customer feedback, that's not really the case (or at least not in the positive way).

The first 2 are the most popular (since they are the supplements).

As for the powder version – it contains the same ingredients as the Original form, but in a soluble version.

Other than that, SeroVital sells some additional products (which are not very popular or amazing, though).

Now – it's true that this product looks awesome on paper.

But it's quite the opposite in reality.

And it's not me saying this:

So SeroVital might have been a good product in the past – but it's clearly not one anymore.

That's why, given all the problems it currently has, it's a supplement I would stay away from.

I will begin by giving you some general info on this supplement:

This supplement claims to be “America's #1 anti-aging therapy”.

And according to its website – its main goal is to reduce the signs of aging.

In terms of action mechanism – it's the typical HGH booster:

Now, when it comes to its claims – I doubt SeroVital does what it promises.

If it really did, it would not have such an impressive number of complaints.

Plus – it's surely not America's top anti-aging product:

So when it comes to these claims, I personally don't trust SeroVital too much.

This product's name is actually its brand name.

Its producer is called SeroVital – or at least there's no other name given out:

So I'm pretty sure it's not a scam from this point of view.

Still, I personally don't consider its products are amazing (as they also cost quite a lot).

SeroVital's composition could be much better overall.

However – it's worth noting that its 2 versions have some different formulas:

Now – the Advanced version has a pretty good formula overall.

But the Original form is much weaker (probably a 4/10).

So as an average – SeroVital's formula isn't worth more than 6/10.

This complex is made from 6 active substances.

However – the individual dose of each isn't mentioned:

So from this point of view – the formula looks very disappointing and weak.

Now, here are the 6 active compounds inside the Renewal Complex:

As you can see – SeroVital Original's formula isn't anything special.

It mostly contains some pretty common amino acids and no original/trademark compound.

Compared to the Original version, this one is clearly superior.

That's because it contains all the ingredients from the previous version – plus some additional ones:

Now – out of all these ingredients, it's mostly the Proprietary Blend that has an anti-aging role.

The others are mostly meant for energy and general health.

So let's see the substances inside this blend (again, there are no individual doses):

Now – even this composition isn't amazing, compared to other supplement.

But it's definitely better than the Original version.

Especially if we're talking about the Original version.

The Advanced form is indeed better (mostly because of its Proprietary Blend).

But none of them is extremely valuable, if you ask me.

Considering that both of them cost a little fortune – I would surely not recommend any.

There are some really weird things about SeroVital here, if you ask me.

Surprisingly or not – the 2 versions of this supplement have some totally different pills.

Let me explain – first of all, the Original form:

Now – swallowing these pills should not be too hard.

They are indeed a bit bigger than most capsules – but you should be able to take them easily.

Secondly, things look quite different when it comes to the Advanced form.

That's because there are 3 types of pills:

Basically – you have to take a certain amount of each type of pills (more in the lines below).

Surprisingly or not, the 2 tablets are actually smaller than the yellow capsules.

So swallowing them should be even easier actually.

Now – let's see how exactly you should take these pills (because the serving size is quite tricky).

First of all, the Original version:

As for the Advanced form:

Basically – the daily dosages of SeroVital are huge.

It's true that in terms of quality, you're not getting a lot of the active ingredients.

But in terms of quantity – 6 (or even 4) pills every day is very inconvenient.

And there's one more thing.

The label recommends not to eat/drink anything for 2 hours before and after taking the 4 yellow pills.

That's why SeroVital's dosage is very uncomfortable and inconvenient.

In fact – it's probably the hardest-to-take supplement among anti-aging products.

In order to see how this supplement works – I decided to look at its customer feedback.

Since SeroVital is a very popular product, find some real opinions on it was quite easy.

Note: I only analyzed authentic reviews, not promotional ones.

This product is available both on Amazon and on its official website.

However – the reviews it has on both pages are quite different:

As I always say – official websites tend to show only (or mostly) positive reviews.

That's why I consider those opinions false-positive.

For this reason, I will only include here the reviews SeroVital has on Amazon.

So here's what most satisfied users say about it:

However, it's worth noting that many of these positive reviews are rather old (2017 or less).

There are some actual ones, as well.

But most of the recent opinions (and the more important ones) are rather negative.

For both versions – most reviews from Amazon's first page are extremely negative:

In my opinion, all these similar complaints cannot be a coincidence.

Especially since they are all on top of SeroVital's reviews.

That's why I honestly doubt this product's effectiveness.

SeroVital has a huge number of authentic reviews.

But surprisingly or not – many of them are severely criticizing it.

So both versions of this supplement seem pretty dangerous overall.

That's why there's no way I could recommend SeroVital.

Especially when there's a much cheaper alternative with a way better effect.

Unlike most anti-aging supplement, SeroVital has a huge per cent of negative reviews.

And a big part of these complaints are actually related to side effects:

Now – most of these complaints are quite uncommon for HGH boosters.

They usually cause issues like stomach cramps, nausea, minor headaches.

And even so – those secondary reactions usually appear quite rarely.

On the other hand, they seem to be extremely common when it comes to SeroVital.

That's why I advise you to think twice before going for this supplement (in any version).

Another bad thing about SeroVital is that it's extremely expensive.

HGH boosters tend to be quite pricey in general – but SeroVital is way above the average.

As I already told you – this product is mostly sold in 2 places:

It's somehow an irony that its website offers much higher prices than Amazon (which is a retailer after all).

Official websites tend to have much better deals than 3rd party sellers.

But that's obviously not the case here.

That's why I'm going to analyze Serovital's price on Amazon (and I recommend you to get it from there):

Basically – this product is extremely expensive itself.

Not to mention that its formula is very disappointing and that it could be pretty dangerous (according to its reviews).

So I would clearly not recommend it in any form.

I only want to compare SeroVital with my #1 recommended anti-aging supplement.

It's a product called GenF20 Plus:

Compared to SeroVital – GenF20 Plus is a better choice from all points of view.

It's stronger, cheaper, highly praised and it has a much smaller serving size.

So it's a much better deal overall.

SeroVital is one of the priciest HGH-boosters from the market.

It's true that it's been very popular at one point.

But at the moment – it's clearly not a good option anymore.

So there's no way I could recommend a supplement of this kind.

Here's how I would sum up my opinion on SeroVital (in 3 ideas).

Both versions of this supplement have some pretty basic formulas.

It's true that the Advanced form is superior (since it contains some extra stuff).

But compared to other HGH-boosters – they could be a lot better in terms of ingredients.

This is a specific problem of this supplement:

Moreover – it also recommends not eating/drinking 2 hours before and after taking the 4 capsules.

To be honest, this dosage is extremely difficult to follow.

Judging after the huge number of complaints it has, SeroVital is far from a safe product:

Besides – the side effects reported by many users are not very common for HGH-boosters.

That's why you're taking a risk if you go for Serovital.

Short answer: Definitely not worth it.

I cannot call it a scam – since I have no actual proof that it is one.

But it's far from a good supplement (from most points of view):

So SeroVital scored pretty low in most chapters I analyzed – that's why there's no way I could recommend it.

But what should you go for instead?

My top pick is another HGH-booster called GenF20 Plus:

Compared to SeroVital, GenF20 Plus is much better in every aspect.

So between these 2 – I would definitely go for it.